A global women’s festival is based in Santa Barbara.  Why does this matter? 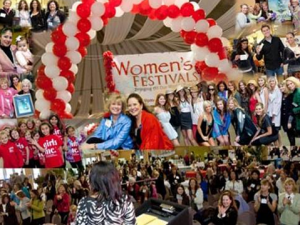 The original title for this post was “Women Descend Upon Central California.”  But I thought better of it.  For the point I want to make is not that women this week are flocking to (i.e., “descending upon”) a really cool festival in Santa Barbara, but that thepurpose of the festival is to educate, inspire, and uplift (help “ascend”) in a place that sits somewhere between San Francisco and Los Angeles.

I am speaking about the 2013 International Women’s Festival, which for the sixth year is welcoming women to come together in Central California.  While the Festival has gone on the road to Arizona, the Cayman Islands, Ireland — and planning an upcoming event in Sudan — the organization is headquarted in this little part of the left coast, and — from where I sit — the venue is meaningful.

First, as I have written before, the Central Coast, with its real and symbolic proximity to California’s Central Valley — the home of the farm labor movement — has attracted a new generation of progressives that today are looking to tackle some of the new or persistent challenges facing women, youth, and minorities.  Looking at the speaker and sponsor lineup, I see that many of those folks are represented at this year’s festival. The Festival — with its emerging global reach driven largely by social media and its roving event schedule — gives these new leaders a larger platform in the international community of 21st-century activists and influencers.

Second — and I have made this point less often — the Central Coast appears to be at the early stages of an entrepreneurial renaissance.  Every year, before Christmas, my family and I take a long ride down the coast, and we’ve been learning about more and more new ventures springing up in places like San Luis Obispo, Santa Maria, and much further south, Carpinteria.  The latter may not fit on the map people call Central California, but for my wife and I, it fits the mental map — it does not feel like Southern California.  It also happens to be the home of Lynda.com, an ed-tech startup and one of the bigger success stories in all of California this year (disclosure:  I have no relationship with the company, by my sister firm does).  The CEO of Lynda.com, Lynda Weinman, is one of the keynote speakers at the festival this year, a real measure of the clout that tech now in the community as well as the region.

Third — and perhaps most important — it feels like the time has come for the Central Coast to project its own vibe, its own identity, its own set of values. The Central Coast today is much more than an idyllic pit stop on the drive from San Francisco to LA.  It’s a place of hope, experimentation, and new kinds of business.  And, as I note in the headline, it’s a place where women are not just present but out in front.  Fly, drive, or take the train to Santa Barbara (one of the best rides on the planet).  The new sisterhood will be there to greet you.